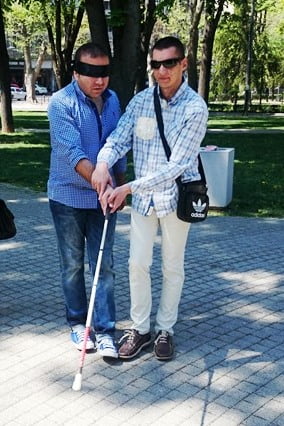 Rotaract Club Belgrade Dedinje this year organizes traditional action, the fourth in a row, walking with blind and visually impaired people. This year, for the first time, we will actively participate in the project. Also, the activity will be realized in Belgrade in cooperation with the Rotaract Club Belgrade Metropolitan.

Awareness-raising is necessary, bearing in mind the problems related not only to the movement of blind and visually impaired persons, such as the lack of relief paths for movement, the lack of sound signalization in traffic, but also the lack of access to public institutions, the lack of information available in the Braille letter within the same institutions, the problem of the high prices of the developed technological equipment that can enable these people to function more easily in their lives. This is an opportunity to do something for them!

The realization of the action implies that each blind and visually impaired person directs (with a white stick) a person who is not blind, who will have a black eye around his eyes. At any moment, they will be accompanied by a team of officers who will have the duty to steer couples in a walk so as not to cause any injuries to participants.

Blind and visually impaired people face everyday problems with many problems that we are not aware of and this is an opportunity to enter their world for a moment, under their skin.

This activity is an overture to the donor dinner planned for June 10th at the House of King Peter (the details will be available soon).

Walking with blind and visually impaired people begins at 12 am in Knez Mihailova street in front of number 34, the landmark is Delijska fountain.