Another Rotary charity event is behind us. On Saturday, June 25th 2022 the traditional Charity Tennis Tournament, organized by the Rotary Club Stari Grad, took place with great anticipation. The main purpose for this tournament is fund raising for the elementary school ‘Jelena Majstorović’ in Zaječar, which is attended by children with special needs.

The tournament was originally scheduled for May 28th, 2022. however, it was postponed to the end of June due to bad weather. The organizer of this charity tournament is the outgoing president of RC Stari Grad, Tomo Jelenković, together with the Tennis Club Topaco, where tournament took place. The representative of our club, Tamara Matejić, played two matches on the first day of the tournament. A large number of tournament participants, visitors and friends of the clubs encouraged the participants, until the rain interrupted the first semifinal matches, so after the tennis players got completely wet, everything was postponed for the next day. The entire event was covered by the local Zajecar television, as well as the journalists of the Sports Journal.

On Sunday, June 26, 2022 the final match was over, and the champion of the tournament Finko Avram member of the Rotary Club Skadarlija, took the trophy, although all participants are real winners since they played to help children with special needs. 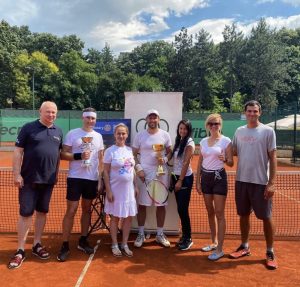