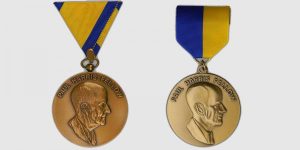 The first Paul Harris Fellow medallion, left, and a later version. Various lapel and neck ribbons were used with this medallion throughout the years.

Rotary established the award in 1957 to encourage and show appreciation for significant contribution to the Foundation’s program at the time. A Paul Harris Fellow (PHF) is considered an individual who donates more than $1,000 a year . These laureates are individuals who meet the high professional and personal standards set by Harris himself. The PHF Club member received a special certificate and a gold badge. The club may decide to award a significant medal, on the blue-gold ribbon.

We are very proud that our Club has 4 PHF members. The first PHF member of the Rotary Club Belgrade Dedinje is Slobodan Stankov, followed by Igor Mijatovic, Nikola Krstic and Nadica Mardjonovic, while Marijana Krunic became the holder of this award during her membership in our Club. 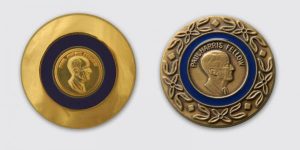 Women’s lapel pin, left, was used until 1997. In 1997, the Foundation standardized the designs of the medallion and lapel pin, using the same for men and women, right. Both bear the laurel wreath design of the Multiple Paul Harris Fellow pins and are still in use today.

He was a lawyer from Chicago, who founded the Rotary Club in 1905. After founding a law office, Harris began thinking about founding a company for business and professional people. Harris organized the first Rotary club in 1905, with three clients and local businessmen. His initial goal was just to create a club of professional and business people, for friendship and companionship. Harris realized that Rotary needed a greater purpose. When he was elected the third president of the Rotary Club of Chicago, in 1907, first humanitarian project, the construction of public toilets in Chicago were launched. Harris had great ambitions for the growth of Rotary and the club grew rapidly, clubs were opening all over the United States as well as across Europe. By Harris’ death, Rotary International had more than 200,000 members in 75 states.