A joint handover of the presidential duties in Rotary and Rotaract Club Beograd Dedinje was held in the pleasant atmosphere of the Kolarac restaurant, on Saturday, 23rd June 2018. This was also the 39th regular meeting of the Club in the current Rotary Year. We have summarized impressions of the recently completed year in which our members are allocated over 350 hours of community service, carried out many actions some of which are: planting lilacs, sharing New Year’s gifts, ball clear against polio, visiting Corfu for young mathematicians, etc.

Look at photos from handover of duties.

The former President of the Club, Igor Mijatovic, has given his acknowledgments to the distinguished members of our Club and thanked them for the support they gave him during the mandate (in the lower part, you can see awards). 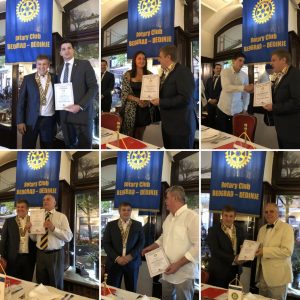 This night, two handover ceremonies were held. First, the President of Rotaract Club Jelena Trifunovic handed over presidential mandate to Marijana Krunic. Jelena thanked the members of her Rotaract Club for cooperation, and she praised the support that our Club provided them at the beginning of the year. After group photographing, the order came at the handover of Rotary Club Belgrade Dedinje. President of the Club Igor Mijatovic handed the Rotary Lent to the President of the Club for 2018/2019 Nikolic Stojadinovic, and then he tied the tile with his name on the back.After an occasional speech, on behalf of all the members of the Club, Nikola handed the recognition to Igor Mijatovic as a gratitude for everything that he done in his mandate.

All participants agreed that the previous Rotary Year was more than successful for both Clubs and we gave full support to the new Presidents with the desire to do a little more in the next year to help those who need our help the most.