Magnolias for the Golubac Fortress 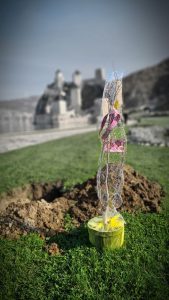 The Golubac fortress erected at the Iron Gate entrance, where the Danube is switching from the widest on its flow into the narrow estuary of the Carpathian mountain. Written sources say that the fortress was first mentioned in 1335, but it was founded before, and there is no closer data on exactly which and when the Serbs or Hungarians built it. Hungarians, Turks, and Serbs ruled the fortress. Historical military leaders who conquered the Golubac fortress are King Ludovik, Bajazit I, Hungarian King Zigmund Luxembourg, Despot Stefan Lazarevic, Duke Jeremiah, Polish knight Zavisa Black, Mohammed II, King Mattia Corwin, Emperor Leopold.

Members of Rotary Dedinje had the opportunity to visit the nine towers of Golubac fortress and learn about historical facts related to this magnificent medieval structure on the Danube, organized by the host.

At the Fortress Pavilion was an exhibition dedicated to the oldest preserved Serbian illustrated Cyrillic manuscript, Miroslav’s Gospel, dating back to the 1180s. The hosts of the Golubac Fortress also gave a lecture on Serbia’s historical gem, which was written on parchment on the 181 sheets in leather. Hum’s Duke Miroslav, brother of the great prefect Stefan Nemanja ordered the creation of this gospel of diack Gligoria. The original Miroslav’s Gospel is now in the National Museum in Belgrade, one page 166 is missing, and it is kept at the National Library of Russia in St. Petersburg.
We thank the Golubac Fortress that hosted the Rotary Club Belgrade Dedinje, and we hope this is the beginning of successful cooperation.
The activity of planting Magnolia at the Golubac Fortress was supported by the Lipolist nursery company Topalovic and the courier company BEX Serbia.

Rotarians planted trees in the name of fellowship, friendship, community service, and contributing to a greener world.